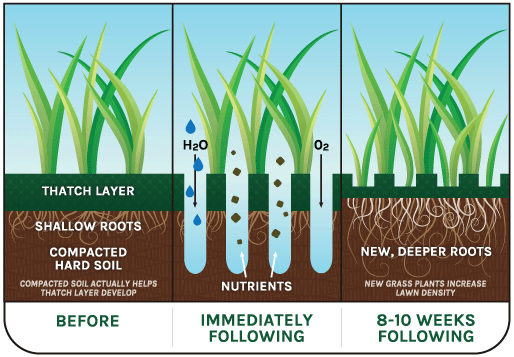 16 Aug What is Aeration?

Tis the season for that dreaded word coming from the mouths of Golf Shop and Tee time attendants everywhere…”AERATION!!”

It makes golf-hungry players cringe as they are trying to get the last few good quality rounds in before the winter golf hibernation sets in. To have their efforts stymied, to use another golf term, can be frustrating to many players where courses turn to discounted rates to keep the golfers loyal to their course for the short term. One of the best explanations of the process was written by one Adam Moeller and it was published by the USGA.  Here are the words he wrote:

The word aeration stimulates negative emotions for many golfers. It may come as a surprise, but golf course superintendents also dislike aeration. After all, the last person who wants to disrupt the smoothness of the putting greens they work so hard to maintain is the superintendent.

Core aeration involves physically removing small soil cores – e.g., 0.5-inch diameter cores – from the turf and is the most common type of aeration. Aeration holes allow excess moisture to evaporate and promote gas exchange in the soil, resulting in stronger root systems and turf that is better able to tolerate golfer traffic.

Proper timing of aeration will ensure the fastest possible recovery and return to smooth surface conditions. The key to a quick recovery is to perform aeration when the turf is healthy and actively growing. The articles, Core Cultivation: Timing is Everything and Easing the Pain of Core Aeration expand on proper aeration timing. There are many types of aeration that superintendents use throughout the season; some are more labour-intensive and disruptive to playing surfaces than others. Less-disruptive forms of aeration, including venting aeration with small-diameter, solid tines, also are beneficial because they can alleviate turf stress by promoting oxygen levels in the soil. Aeration programs that have a small impact on a playing surface generally can be performed throughout the season with little or no disruption to play.

Playing conditions are of the utmost importance for most golfers, and aeration is needed to keep turf healthy and playing well. Aeration can be disruptive, but the long-term benefits of aeration far outweigh the short-lived disruption.

The next time you play on greens that were recently aerated, keep in mind that aeration is performed for the long-term health of the course. The greens may not play their best immediately following some aeration treatments, but everyone is playing the same conditions and golfers still can enjoy the game and make plenty of putts. After all, Tom Watson once shot a 58 when playing at Kansas City Country Club just a few days after the greens had been aerified.

This post was originally written by Adam Moeller for the USGA, and full credit goes to him for this article. Adam Moeller is an agronomist in the Northeast Region.

Sorry, the comment form is closed at this time.